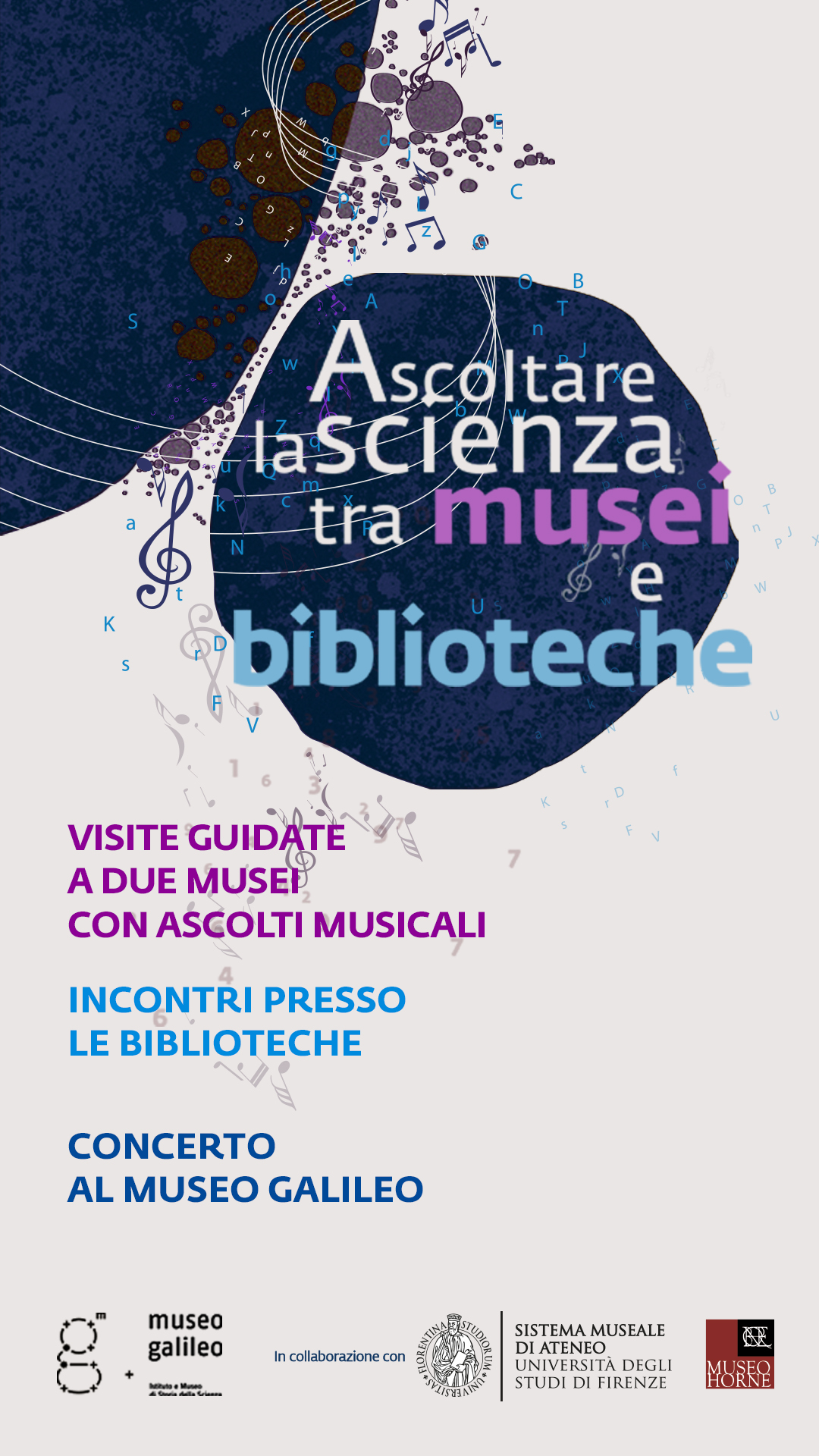 Museo Galileo is organizing a series of guided tours, meetings and a concert on the relationship between science and music, produced with the contribution and sponsorship of the Metropolitan City of Florence.

SUONI DAL PASSATO, TRA ARTE E SCIENZA
(SOUNDS FROM THE PAST, BETWEEN ART AND SCIENCE)
Saturday, November 12, 10 a.m.
Museo Galileo and Museo di Antropologia (via del Proconsolo 12, Firenze)
A guided tour, in Italian, divided into two parts. At Museo Galileo, the sound and musical context evoked by some of the masterpieces of science will be recreated; at the Museum of Anthropology and Ethnology it will then be possible to take a journey through the sounds of the cultures of the world.

ARMONIE CELESTI E SUONI DIPINTI
(HEAVENLY HARMONIES AND PAINTED SOUNDS)
Saturday, November 19, 10 a.m.
Museo Galileo and Casa Vasari (Borgo Santa Croce 8, Firenze)
A guided tour, in Italian, divided into two parts. At the Museo Galileo, the "sounds" of musical instruments depicted on some objects in the collection will be heard, including armillary spheres and celestial globes. Afterwards, in the Great Hall of Giorgio Vasari's Florentine House, the visit focuses on the sound element for the discovery of the precious cycle of frescoes.

In collaboration with Museo Horne and the Sistema Museale di Ateneo di Firenze.
Guided tours are free of charge; payment of a reduced ticket is requested to access each museum. After visiting the first museum, visitors must go independently to the second.
Information and reservations: 055 265311 (Mon-Fri 9 a.m.-6 p.m.)

DONNE TRA SFERE CELESTI, Natacha Fabbri
(WOMEN AMONG CELESTIAL SPHERES)
Monday, November 14, 5:30 p.m.
Biblioteca Ernesto Ragionieri (Piazza della Biblioteca 4, Sesto F.no)
A meeting, in Italian, about the female presence in the cosmos from the Renaissance to the threshold of the 20th century.

GALILEO IN MUSICA, Andrea Gori
(GALILEO IN MUSIC)
Tuesday, November 22, 6 p.m.
Biblioteca di Bagno a Ripoli (Via di Belmonte 38, Bagno A Ripoli)
The event, in Italian, is focused on the influence that Galileo's thought and discoveries have had on pop music.

LA MERAVIGLIOSA IMPERFEZIONE DELL'UNIVERSO, Andrea Gori
(THE WONDERFUL IMPERFECTION OF THE UNIVERSE)
Friday, November 25, 5 p.m.
Biblioteca di Scandicci (Via Roma 38A, Scandicci)
The meeting, in Italian, is focused on the constant influence exerted by science and technology on philosophy, literature and society and how the imperfection, impurity and mutability of the Universe are conditions of life and fertility.

Admission to the library meetings is free.

Free for ticket holders.
In collaboration with Konzert Opera Florence and Baroque Lumina.

Meetings at the library are free admission, subject to availability.